A little about Jon Allison. Or should that be "about little Jon Allison"...?
Jon Allison will be familiar to many as a keen and gifted climber during his early days behind the counter in Glacier Sport, Preston, from which he frequently escaped to the Lakes to indulge in his passion for climbing, photography, and some serious motorcycling. This paved the way for his future years in the retail trade, and finally in 1994 blossomed into his venture as co-owner of The popular Kentdale Rambler outdoor store in Kendal, which he left for a life behind the lens in 2004. Now enjoying a working retirement after 25 years in the outdoor retail trade, Jon regards this as payback time and finally gets to be outdoors again as much as he likes! Unless he's slaving over a hot printer! He supplies several renowned Lake District galleries with his sought after panoramic images, and will currently be found working as a freelance landscape photographer out on the Cumbrian hills and mountains, or creating in his studio in Kendal on rainy days!


"I hope you gain as much pleasure and inspiration while browsing this portfolio as I have had during the creation and presentation of my images. Thank you." 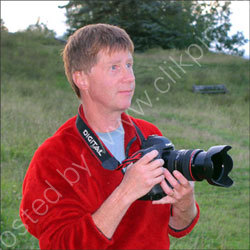 Jon and his EOS1DS Mk11, a formidable pair indeed!